According to the U.S. CDC, the United States has maintained its measles elimination status for over twenty years. The U.S. measles vaccination program started in 1963. And on Feb 17, 2022, the CDC published updated measles vaccination schedules for 2022.

On Feb. 23, 2022, the U.S. CDC's MMR Vaccine Work Group presented: Overview in the U.S. by Ms. Lynn Bahta, Work Group Chair; and Overview of GSK's MMR Vaccine by Remon Abu-Elyazeed, MD, Ph.D., US Vaccines Medical and Clinical Affairs. The CDC recently reported for the 2020–21 school year, measles vaccination coverage was 93.9% for two doses of measles, mumps, and rubella vaccine. And the CDC lists the Top Ten Countries confirming measles cases as of March 2022.

M-M-R - The Measles, Mumps, and Rubella Virus Vaccine Live (M-M-R II) is approved by the U.S. FDA for use in people ages 12 months and older. Two doses of the MMR vaccine are about 97% effective at preventing measles, and one dose is about 93% effective.

Measles Vaccines Approved Outside the U.S.

Priorix - is currently licensed outside the U.S. in over 100 countries, including Canada, the U.K., and New Zealand. It is recommended for use in individuals aged ≥9 months, according to a 1- or 2-dose schedule, depending on the country. Priorix protects against measles, mumps, and rubella.

Tresivac - This vaccine is available in India to prevent measles, mumps, and rubella. Serum Institute of India Ltd is the manufacturer.

April 27, 2022 - “Measles is more than a dangerous and potentially deadly disease. It is also an early indication that there are gaps in our global immunization coverage, gaps vulnerable children cannot afford,” commented Catherine Russell, UNICEF Executive Director.

April 8, 2022 - The Republic of Congo has declared a measles epidemic. Pointe Noire and the district of Ntchamba-Nsassi in the south of the African country are among the most affected areas, with more than 3,400 cases, including 78 deaths, according to the Ministry of Health and Population. The Congolese government and the Global Alliance for Vaccines and Immunisation (GAVI) are preparing the roll-out of a vaccination campaign in May 2022.

April 6, 2022 - Research to be presented in Portugal (23-26 April) suggests that the current two-dose measles immunization target of 95% may be the minimum required to provide protective immunity to achieve and maintain measles elimination. Only six countries in the EU/EEG (Croatia, Hungary, Iceland, Portugal, Slovakia, and Sweden) report coverage of two-dose measles vaccine of 95% or higher, suggesting that eliminating measles in the EU is uncertain.

March 30, 2022 - The BMJ published an Opinion article: We urgently need to increase MMR vaccine uptake. Even a small decline in MMR vaccine uptake—the “canary in the coalmine”—can herald disease outbreaks. The latest U.K. data for July to September 2021 reported 88.6% uptake of the first dose of MMR at 24 months, with 85.5% uptake of two doses at five years—a decline from previous quarters.

March 17, 2022 - The U.S. CDC issued a Level 1 Travel Advisory stating: There is an outbreak of measles in Afghanistan. Cases have been reported in all provinces, with the highest rates occurring in Paktya, Balkh, Kunduz, Zabul, Kandahar, and Logar. All travelers to Afghanistan, including infants and preschool-aged children, should be fully vaccinated.'

March 14, 2022 - The WHO confirmed a measles vaccination campaign launched in Afghanistan; around 1.2 million children in 24 provinces get vaccinated.

March 8, 2022 - The ECDC reported measles is a serious concern in Ukraine, as the overall vaccination coverage for two doses of measles-containing vaccine (81.9% in 2020) is insufficient to prevent outbreaks.

February 5, 2022 - The early warning, alert, and response network (EWARN) detected an increased number of measles cases in the Albad district in northwest Syria, and the measles outbreak spread to other areas. An outbreak response immunization campaign was conducted. A total of 47,061 children were vaccinated (72% coverage).

February 1, 2022 - The U.K. Health Security Agency announced one in ten eligible children under the age of five in England haven't had the MMR vaccine or are only partially vaccinated.

January 27, 2022 - The Lancet published an article that concluded: Disrupted vaccination activities during the pandemic increase the potential for another resurgence of measles shortly, and effective, timely catch-up vaccination campaigns, firm commitment and leadership, and sufficient resources will be required to mitigate this threat.

Measles is a very contagious disease caused by a virus. It spreads through the air when an infected person coughs or sneezes. In fact, the measles virus can stay in the air for up to 2 hours after an infected person was there. So you can get infected by simply being in a room where an infected person once was. It is so contagious that if one person has it, up to 90% of the people close to them will also become infected if they are not protected. 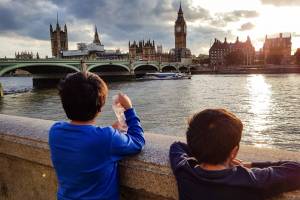